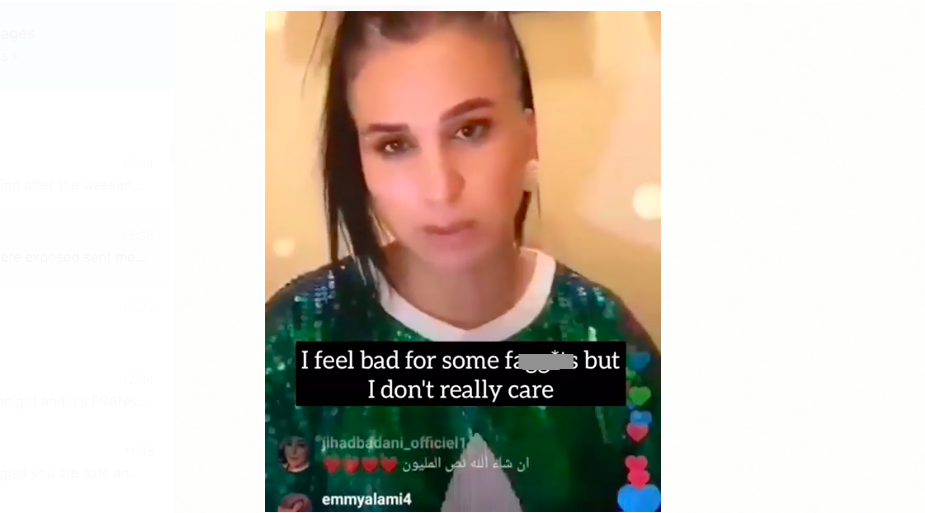 While most of the world ban together and try to support one another, one evil is using this time as an opportunity to encourage a witch hunt on the gay men of Morroco – where being gay is illegal as punishable by up to 3 years in jail.

Naofal Moussa – who had 627,000 Instagram followers before her account was deleted – used Live Stream to encourage her female followers to download gay dating apps and out the ones they found.

Pink News spoke to a number of gay men who have spoken out about the terrifying impact it’s had on the community.

“So girls you will go on the app store. You will type in the word ‘gay’. And then a lot of gay apps will show up.”

“These gay apps will show you all the people who are near you. But you girls should create fake profiles and choose that you’re bottoms,” she continues. “Which means you want someone to f**k you.”

Instructing them to download Grindr, Hornet and Planet Romeo, she goes on; “Listen girls and women that think they have manly gay husbands and sons…. these apps will show you the ‘gay’ people who are near you.”

In another live stream, Moussa held up screenshots of gay men’s profiles that had been sent to her from followers, along with those shared in a private homophobic Facebook group.

“I woke up to my friends’ and people I know’s pictures all over Facebook with the most horrible and homophobic captions,” a 19-year-old gay man living in Morocco told PinkNews.

“I was in a constant state of fear and panic wondering if my pictures were there too, and when will this reach my parents.” This particular man has hidden his sexuality, since his parents beat him for hanging out with “deviant” people.

While another has deleted all his social media after he was one of those outed.

Other messages sent to gay men after Moussa’s post include: ‘If I catch you, I’ll cut your throat’, and ‘You f****ts are ruining this country.’

Another man, Nassim* comments: “If our parents know that we’re gay they will immediately kick us out, abuse us or if you’re very lucky and your parents have a little bit of humanity in them, they will keep you but your life will never be the same.”

“You can imagine how dangerous that is during a lockdown,” he says. “They basically will have nowhere to go.”

“She has ruined the lives of so many people just in the past four days.”

Morrocan photographer Hamza Makhchoune has filed a report with the public office in regards to Moussa’s videos. He alleges that she was never accepted by her father and sold out her own community in a bid for acceptance from the heterosexual one.

Petition to bring back the NSFW #ShampooChallenge