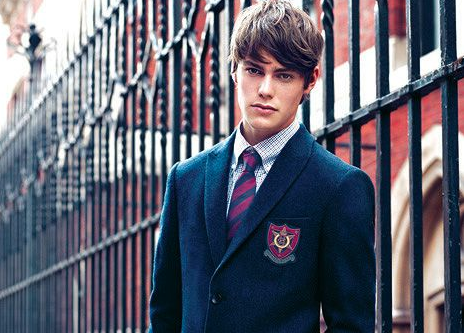 On my 16-year-old son’s last day at school after his GCSEs, he and several of his mates got their photo taken by one of the girls. They are wearing their school uniforms but have pulled their trousers and boxers down to their ankles. They are laughing and everything is on display. He now has this picture up on his bedroom wall and uses it as a screensaver on his computer and his phone.

He says some of the girls now have their own copies too. He also says they are planning a calendar next year. Although my husband and our 17-year-old daughter find this all hilarious, I am shocked and angry. The last time I saw him naked, he was a kid in the bath. I can’t help thinking the change is part of the shock. Am I overreacting?

[RELATED: Fagony Aunt: I’m Desperate for this Guy, but Don’t Want to Mess it Up]

Let’s first outline that your son is 16 years-old, and therefore legal; in which case we would certainly need to see the photo of him and his friends waving their cocks around to determine if you are overreacting. I believe that your fear of overreacting, in part, comes from the unknown. This kind of thing wasn’t done when you were at school in 1812 as nobody wanted to stand around letting it all hang out while Bartholomew captured your rebellion in an oil painting. So rest assured, it’s nothing but horseplay – speaking of horses, dear – how ‘developed’ was your son? I’m sorry, that’s insensitive. But what about his friends?

But listen Jane – can I call you Jane? You seem like a Jane. Listen, let me ask you something? Who’s house do you live in? Yes, yours. Therefore, who is the bad bitch of that household? Yes Jane, it’s you. So the bottom line is, if this photo of your son and his succulent teenage dick are making you feel uncomfortable, you need to stand your damn ground. Don’t lecture him, he’s not a student anymore – instead, call on someone who’s a whiz at Photoshop, ask them to give your son a micro-penis, get it blown up and do a little decorating of your own; the fridge, a framed mantle-piece, fliers for the neighbourhood. Or even better – have your own nudes taken and start handing them out to his friends.

Why stop there? You really wanna make the little son of a bitch (soz) feel uncomfortable, film a sex tape with your husband and force him to watch it on repeat. Will he be scarred for life? Probably. But will there be any full frontals lurking in your home? No, there won’t. And that is how you control teenage hormones.