NEWS: This 18 year-old Gay Cowboy is Standing Tall in the Face of Homophobes & Death Threats 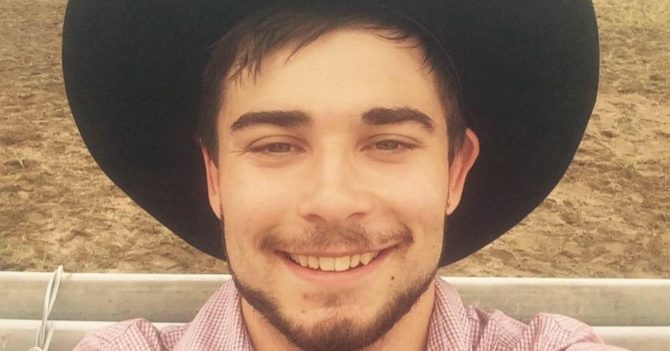 Joshue Goyne – who is known online as ‘The Gay Cowboy’ – partakes in rodeos on the Central Coast of Australia and stands up to the homophobia that the country still faces. Goyne has be sharing his stories via social media and received a huge response.

“Today I was asked if I thought it was good that gays died of AIDS, and then the guy said he wished it was 1850 so he could shoot me for being a fag,” the 18 year-old LGBT activist tells in his shocking footage. But it takes more than sticks and stones to break his bones… or his spirit, for that matter.

Goyne’s bravery, and at such a young age, is commendable, and says he will “happily” give a voice to anyone who’s too scared to speak up. In a recent interview, Goyne says that he’s had a great response to his online videos, and that straight cowboys have even said that they’d stand-up for him at the rodeos if he encountered any trouble! N’aww. That’s that’s the kind of news we like to hear.

Being on the other side of the world, and even just more open-minded locations within our own country, we can easily be blinded to the hardship that others face, “out of sight, out of mind”, like they say, but we’re fully supportive of the Goyne’s voice, and change he’s making in Rural Australia.

Today I was vilified for being an openly gay cowboy am I going to quit the rodeo circuit hell no!#gaycowboy2017#thegaycowboy#gayisok#homophobiaendswithmeFollow The Gay Cowboy Page Please like and share lets get the message out homophobia is not ok!Visit thegaycowboy.com to help me keep rodeoing?