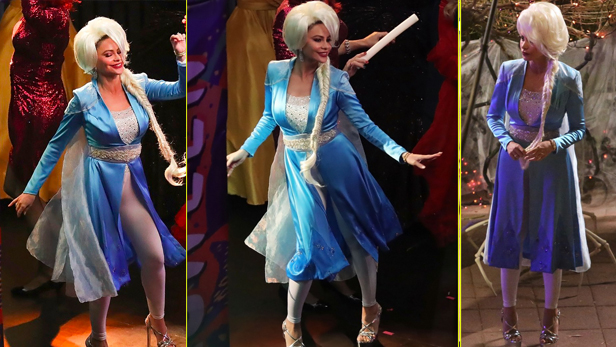 Halloween preparations are underway on set of hit TV show, Modern Family. The Colombian queen, Sofia Vergara, has been serving ice queen realness. While we’d prefer she was serving up racks of another Colombian delicacy, we’ll still take this lesbian eleganza in the form of Disney’s Princess Elsa, (aka, the first lesbian to throw a Doc Marten at Cinderella’s palace).

We love how she upgraded Elsa to a hoe with the tacky stripper heels, but girl, what’s going on with the wig? Where is the assistant? And of course, she was joined by a gaggle of drag queens, because what’s a Halloween party without a man in a dress doing ketamine off his Superdrug acrylics?

Obviously, we’re not left stunned by the originality of the outfit – Elsa? Really? Seriously, Let It Go – we’re hoping the others will be dressed just as queer. Ariel Winter could be Cher, Claire as Lady Gaga and Mitch and Cameron as Bert and Ernie.

Some of the cast were gathered together filming the Halloween special on September 18th in Los Angeles. With on-screen family Sofia Vergara, Rico Rodriguez and Ed O’Neill attending a costume party.

During summer the Modern Family cast joined for the final table read of the last ever series. Clearly they didn’t discuss wig lines.

Charlie Carver and Isaac Powell will hook-up for ASH11