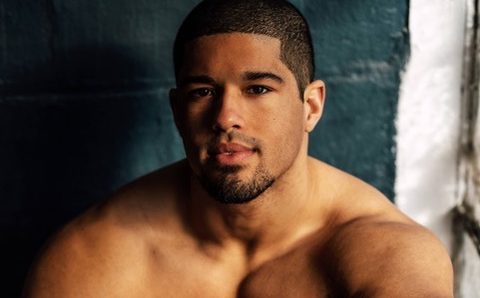 Anthony Bowens is ditching his clothes, and one day hopes to ditch labels altogether. The buff wrestler (no seriously, his shoulders are the width of our car), opened up to Gay Times, about coming out initially as bisexual, and then again as gay.

“I truly believe that sexuality does exist on a spectrum. There are so many different people with so many different descriptions of how they identify. I’m friends with a lot of people who identify as bisexual, and some are 50/50, others lean towards guys, and others lean towards girls. That’s why I don’t like labels in general, because everybody’s so unique. You can’t really pinpoint one specific thing to a person.”

Bowens goes to say that biphobia from within the LGBT+ community was one of the “biggest” issues coming out the first time around.

“We get judged by so many people in this world, so to take that judgement and turn it around on somebody within the community who’s already struggling with other issues, when they’re looking for support, I think that’s horrible.”

Just because ‘bisexual’ was a layover to gay for many of us, doesn’t mean it is for everybody. Besides, we’re all familiar with how scary it is, so even if somebody is gay, what’s the harm in letting them fully come out when they’re ready?

But Bowen says the support from the wrestling community has been great: “If anything, it’s made my relationships with a lot of my co-workers and the other wrestlers a lot stronger, because I’m not hiding anymore. They like the fact that I can openly be myself.”

Bowen believes that most of the homophobia in sport comes down to the ignorant idea that queer sportsmen are at least partially there to locker room creep – which he brands “ridiculous”. Rightly so… we can literally see dick anywhere. What makes your overgrown shrub and toadstool so special?!

He like to get rid of labels altogether but “at some point down the line, […] in the current time, I do think labels are important specifically for visibility.